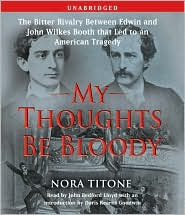 My Thoughts Be Bloody: The Bitter Rivalry Between Edwin and John Wilkes Booth That Led To An American Tragedy by Nora Titone, read by John Bedford Lloyd

I usually don't check out books on CD that are longer than 8 discs, but the blurb on Titone's 16 disc book caught my interest. I was impressed that the foreword was written (and on the audio book, read by distinguished historian Doris Kearns Goodwin.) I thought, if it's good enough for Doris, it's good enough for me.

Using correspondence and memoirs of friends and family, Titone draws a fascinating portrait of a family and its times all leading up to the bloody climax on April 14, 1865. Beginning with departure for America by the family's patriarch, famed tragedian Junius Brutus Booth with his pregnant 16 year old mistress, Titone follows the expanding Booth clan through decades of hardships and triumphs.

Junius was a brilliant, but deeply flawed individual who passed on both his great genius and terrible alcoholism to his son Edwin. His son John Wilkes inherited all his father's sumptuous stage costumes, but unfortunately for him and the nation, none of his father's talent. John Wilkes comes across as a young man of great self regard, but little self control. A modern reader, familiar with the events in Oklahoma City and Columbine can see that his was a crime just waiting to happen.

In chronicling this family, Titone gives a fascinating look at the history of the America and the American theater in the early days of the Republic. Father Junius was a drinking buddy of Andrew Jackson and Sam Houston. Edwin was a dear friend of Julia Ward Howe, author of " Battle Hymn of the Republic." Julia's abolitionist husband, Samuel Gridley Howe, was a supporter of John Brown and was reputed to have helped finance Brown's raid on Harper's Ferry. John Wilkes abandoned his stage company in Richmond to join cadets from V.M.I. who were called to guard the Charles Town area during Brown's trial.

John Bedford Lloyd's narration is well done. His reading enhanced the text without drawing attention to itself. The book reads, or in this case listens like a well written novel, but the scholarship is sound. Sources are well documented. As usual, my only problem with listening to non-fiction is the lack of illustrations and photographs that are in the print format.
Posted by Megan at 10:21 AM