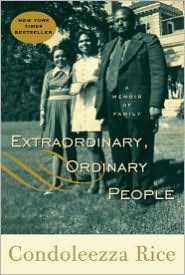 Extraordinary, Ordinary People: a Memoir of Family by Condoleeza Rice

Condoleeza Rice's biography of her parents, Extraordinary, Ordinary People: a Memoir of Family, details the love, attention, and opportunities she experienced as an only child growing up outside of Birmingham in the late 1950's and early 1960's. Her parents, unlike Martin Luther King, Jr., did not march in protest, instead they, like their parents before them, worked with African American youth to get an education and go to college. At least one of her grandparents founded a college and an aunt was the first Black female to receive a Ph.D.

After much thought, her mother, a musician herself, named her daughter after a musical term "con dolcezza" which is a direction to play "with sweetness." Sweetness is very much a part of this book. Even in segregated Birmingham, Condoleeza's life started out with sweetness, almost like whites imagined existed in the "colored sections" of Birmingham. Aspects of segregation touched their lives, but segregation is not the focus of the book. The focuses are on Ms. Rice's family and ancestors' abilities, intelligence, strengths, and drive to prosper and help others.

This book, a lovely tale, nicely told, is intended as a biography of Rice's parents, but readers learn about the author through her family history. Rice is the daughter of two educators. Her father was also a minister. She inherited many talents which her parents allowed her to explore. They encouraged her to think, read, and learn. She pursued dance, piano, and ice skating. She began playing piano before she was five. She started kindergarten early, but was homeschooled one year when she was not old enough to start first grade.

Ms. Rice received her master's degree before other students her age completed their undergraduate work. Her Ph.D. dissertation was finished before she accepted a position at Stanford, but to say she is an "overachiever" denies the interest and zest she approaches learning, which reflects the encouragement, pride, and cheer leading her parents provided, up to and including driving her the ice rink for lessons at 5:00am. These extraordinary, ordinary parents allowed their daughter to learn, mature, and blossom into a well qualified leader.

While in graduate school at Stanford, she pursued foreign relations which eventually lead her to the White House under the administration of both President Bush.
Posted by Megan at 3:37 PM