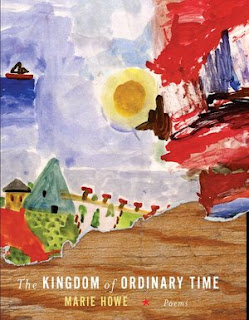 We're wrapping up April and National Poetry Month. So we're leaving you with a final favorite volume of verse.

Every day I want to speak with you. And every day something more important
calls for my attention--the drugstore, the beauty products, the luggage

I need to buy for the trip.
Even now I can hardly sit here

among the falling piles of paper and clothing, the garbage trucks outside
already screeching and banging.

The mystics say you are as close as my own breath.
Why do I flee from you?

My days and nights pour through me like complaints
and become a story I forgot to tell.

Help me. Evan as I write these words I am planning
to rise from the chair as soon as I finish this sentence.

This title, and others like it, can be found in the West Virginia Library Commission Reference Library.
Posted by Megan at 11:27 AM No comments: 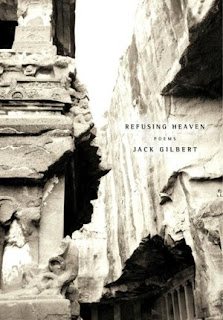 This week's pick of Refusing Heaven: poems by Jack Gilbert. Gilbert was born in Pittsburgh and is the author of The Great Fires: Poems 1982-1992, Monolithos, and Views of Jeopardy.

Everyone forgets that Icarus also flew.

It's the same when love comes to an end,
or the marriage fails and people say
they knew it was a mistake, that everybody
said it would never work. That she was
old enough to know better. But anything
worth doing is worth doing badly.
Like being there by that summer ocean
on the other side of the island while
love was fading out of her, the stars
burning so extravagantly those nights that
anyone could tell you they would never last.
Every morning she was asleep in my bed
like a visitation, the gentleness in her
like antelope standing in the dawn mist.
Each afternoon I watched her coming back
through the hot stony field after swimming,
the sea light behind her and the huge sky
on the other side of that. Listened to her
while we ate lunch. How can they say
the marriage failed? Like the people who
came back from Provence (when it was Provence)
and said it was pretty but the food was greasy.
I believe Icarus was not failing as he fell,
but just coming to an end of his triumph.

This title, and others like it, can be found in the West Virginia Library Commission Reference Library.
Posted by Megan at 10:15 AM No comments: 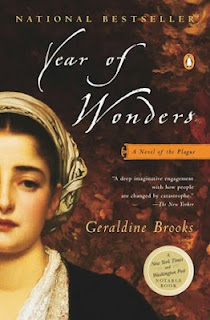 April's Capitol Read is Year of Wonders: A Novel of the Plague by Geraldine Brooks

When an infected bolt of cloth carries plague from London to an isolated village, a housemaid named Anna Frith emerges as an unlikely heroine and healer. Through Anna's eyes we follow the story of the fateful year of 1666, as she and her fellow villagers confront the spread of disease and superstition. As death reaches into every household and villagers turn from prayers to murderous witch-hunting, Anna must find the strength to confront the disintegration of her community and the lure of illicit love. As she struggles to survive and grow, a year of catastrophe becomes instead annus mirabilis, a "year of wonders."

Visit the Capitol Reads page on the WVLC website for more information and future discussion titles.

Avast me'mateys!  Want to learn more about the inspiration behind Jack Sparrow.  Arrh, well check out these titles from the Library Commission.

Life Among the Pirates by Stuart Kallen
Discusses facts and myths about pirates who sailed and plundered on the seas from the sixteenth to the nineteenth century.

The end of Barbary Terror: America's 1815 War Against the Pirates of North Africa
When Barbary pirates captured an obscure Yankee sailing brig off the coast of North Africa in 1812, enslaving eleven American sailors, President James Madison first tried to settle the issue through diplomacy. But when these efforts failed, he sent the largest American naval force ever gathered to that time, led by the heroic Commodore Stephen Decatur, to end Barbary terror once and for all.

Blackbeard : America's most notorious pirate by Angus Konstam.
Of all the colorful cutthroats who scoured the seas in search of plunder during the Golden Age of Piracy in the early eighteenth century, none was more ferocious or notorious than Blackbeard. As unforgettable as his savage career was, much of Blackbeard's life has been shrouded in mystery--until now.
Posted by Heather at 8:52 AM No comments:

The 2012 winners were announced this afternoon. They include:

Drama - "Water by the Spoonful" by Quiara Alegría Hudes

History - "Malcolm X: A Life of Reinvention," by the late Manning Marable (Viking)

General Nonfiction - "The Swerve: How the World Became Modern," by Stephen Greenblatt (W.W. Norton and Company)

Click here to check the WVLC catalog for availability for these titles and more!
Posted by Megan at 3:48 PM No comments: 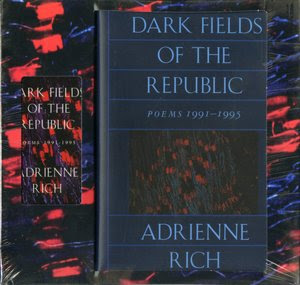 This week's pick is Dark Fields of the Republic: Poems 1991-1995 by Adrienne Rich

What Kind of Times Are These

There's a place between two stands of trees where the grass grows
uphill
and the old revolutionary road breaks off into shadows
near a meeting-house abandoned by the persecuted
who disappeared into those shadows.

I've walked there picking mushrooms at the edge of dread, but
don't be fooled,
this isn't a Russian poem, this is not somewhere else but here,
our country moving closer to its own truth and dread,
its own ways of making people disappear.

I won't tell you where the pace is, the dark mesh of the woods
meeting the unmarked strip of light---
ghost-ridden crossroads, leafmold paradise:
I know already who wants to buy it, sell it, make it disappear.

And I won't tell you where it is, so why do I tell you
anything? Because you still listen, because in times like these
to have you listen at all, it's necessary
to talk about trees.

This title, and others like it, can be found in the West Virginia Library Commission Reference Library.
Posted by Megan at 10:32 AM No comments: 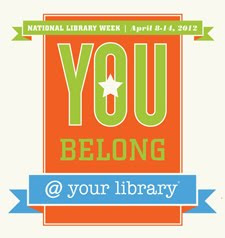 Celebrate National Library Week. Let the world know that you love your library!

For more information and images you can upload to social media sites, visit atyourlibrary.org 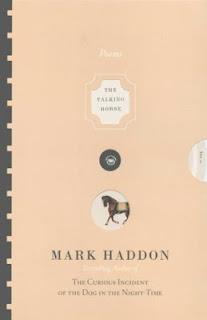 It comes as a surprise to find that hell
is the same house you've lived in these nine years.
Two orange stains beneath the kitchen taps,
birdsong in the yard, those floral curtains.
But you're not at home. Not by a long way.
That fist of wet meat in your chest
will not let you forget. The seconds pass,
as slow as that frozen age before the child
hits the red bonnet of the skidding car.
You light a Marlboro from the dog-end
of the last. Outside, shoppers and workmen
swim through their day like dolphins, ignorant
of how they do this stupid, priceless trick
you once knew. The phone rings. Your cigarette smoke
does its poisonous little ballet.

This title, and others like it, can be found in the West Virginia Library Commission Reference Library.
Posted by Megan at 10:14 AM No comments: 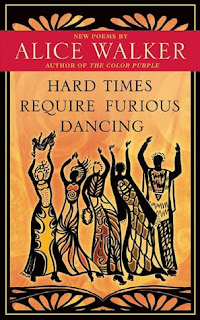 Watching You Hold Your Hatred

Watching you
hold
your
hatred
for such a long time
I wonder:
Isn't it
slippery?
Might you
not
someday
drop it
on
yourself?

I wonder:
Where does it sleep
if ever?

sit
in the
lap
of
the one
who
cherishes
you?

There is no
graceful
way
to
carry
hatred.

While
hidden
it is
everywhere.

This title, and others like it, can be found in the West Virginia Library Commission Reference Library.

Looking for information on a particular subject? Try our research guides!

Looking for information on a particular subject, but are not sure where to start?  Start with the Library Commission Research Guides.  These subject guides are designed to provide you with materials related to a variety of subjects, and new subjects are being added weekly.  Research Guides added last week include:


Not finding what you are looking for?  Fill-out our ask a librarian form to get information or send an email with the topic.
Posted by Heather at 2:05 PM No comments: