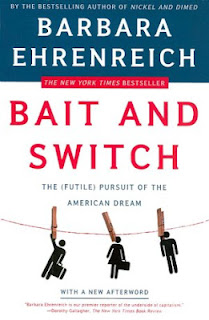 June's Capitol Read is Bait and Switch by Barbara Ehrenreich

Americans’ working lives are growing more precarious every day. Corporations slash employees by the thousands, and the benefits and pensions once guaranteed by “middle-class” jobs are a thing of the past.

In Bait and Switch, Barbara Ehrenreich goes back undercover to explore another hidden realm of the economy: the shadowy world of the white-collar unemployed. Armed with the plausible résumé of a professional “in transition,” she attempts to land a “middle-class” job. She submits to career coaching, personality testing, and EST-like boot camps, and attends job fairs, networking events, and evangelical job-search ministries. She is proselytized, scammed, lectured, and—again and again—rejected.

Bait and Switch highlights the people who have done everything right—gotten college degrees, developed marketable skills, and built up impressive résumés—yet have become repeatedly vulnerable to financial disaster. There are few social supports for these newly disposable workers, Ehrenreich discovers, and little security even for those who have jobs. Worst of all, there is no honest reckoning with the inevitable consequences of the harsh new economy; rather, the jobless are persuaded that they have only themselves to blame.

Alternately hilarious and tragic, Bait and Switch, like the classic Nickel and Dimed, is a searing exposé of the cruel new reality in which we all now live.
Posted by Megan at 11:22 AM No comments:

The Library Commission Reference Library will be closed on West Virginia Day, June 20.
Posted by Heather at 1:39 PM No comments:

The newest episode of Library Update is up on YouTube. This is part one. Make sure to watch all of the parts of Episode 10, Letters About Literature.

The West Virginia Library Commission is committed to promoting, assisting, and supporting high quality library services and information resources to all West Virginia residents. This includes getting relevant information out to library directors, their staff, and patrons through various formats. Currently the Library Commission uses its website, Facebook, Twitter, Blog, e-bulletins and now YouTube to disseminate information.

WVLC plans on bringing you current programs, topics, and trends. This broad spectrum includes partnerships, training, programming, and service. We want this program to be a useful, entertaining resource for you. If you ever have any questions or comments regarding topics on this show, please do not hesitate to call us at 1-800-642-9021.

This program is not intended to act as a calendar of events, but as a vehicle of ideology and practical tips. Specific event information can always be found on our website www.librarycommission.wv.gov and at your local libraries.

The video in this post is the first segment of the episode. Check it out, then view parts 2 and 3. Make sure you subscribe to the West Virginia Library Commission YouTube channel so you don't miss the newest episodes!
Posted by Megan at 4:36 PM No comments: