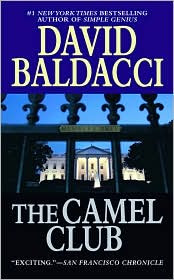 The Camel Club by David Baldacci

David Baldacci's The Camel Club introduces four quirky Washington, D.C. residents, who discover the truth and hold the government accountable. The group is led by a man known as Oliver Stone, who works as a groundskeeper as Mt. Zion Cemetery but spends a great deal of time in a small tent across from the White House. His obsession with government wrongdoing is apparently rooted in his shadowy past. Others in the group include Milton Farb, who is good with computers; Reuben Rhodes, who provides muscle; and Caleb Shaw, who works for the Library of Congress. Together they uncover plots within the government in an attempt to bring the truth to light. Baldacci populates the book with a number of unusual and interesting characters, which helps to make this enjoyable and engaging reading.

Other books in the series include: The Collectors, Stone Cold, Divine Justice, and Hell's Corner.
Posted by Megan at 3:18 PM