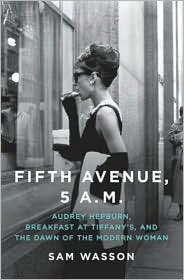 Fifth Avenue, 5 A.M.: Audrey Hepburn, Breakfast at Tiffany's, and the Dawn of the Modern Woman by Sam Wasson

An entertaining, well-researched account of one of the gems of movie romantic comedy, Breakfast at Tiffany's. Truman Capote's 1958 novel about Holly Golightly, a New York call girl from Tulip, Texas, was too sexually progressive to be adapted to the movie screen. Wasson handily lays the groundwork by introducing us to all the main characters- writer Truman Capote, actress Audrey Hepburn, screenwriter George Axelrod, director Blake Edwards, composer Henry Mancini, the Motion Picture Production Code, and the Little Black Dress - and then weaves all the stories together to capture this era of Hollywood movie making. It's filled with gossip, anecdotes, and anaylsis of the mores of 1950's Hollywood.

Wasson probably falls short of selling the argument that this film was the "Dawn of the Modern Woman" but its arrival in the early '60's gave women a compelling image to replace the "good girl" of the 1950's. It's nonfiction that reads like a novel. I think Truman Capote would be pleased.
Posted by Megan at 12:40 PM