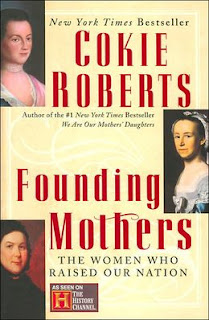 January's Capitol Read is Founding Mothers: The Women Who Raised Our Nation by Cokie Roberts

In the histories of the American Revolution, much has been written about America's founding fathers, those brave men who signed the Declaration of Independence, battled the British, and framed the Constitution. Yet the wives, mothers, sisters, and daughters who supported, encouraged, and even advised them have been virtually ignored.

In Founding Mothers, Cokie Roberts brings to light the stories of the women who fought the Revolution as valiantly as the men, sometimes even defending their very doorsteps from British occupation. While the men went off to war or to Congress, the women managed their husbands' businesses, ran the farms, and raised their children. These women who sacrificed for the fledgling nation spent months or even years apart from their husbands, at a time when letters were their only form of contact.

Drawing upon personal correspondence and private journals, Founding Mothers brings to life the everyday trials, extraordinary triumphs, and often surprising stories of Abigail Adams, Mercy Otis Warren, Deborah Reed Franklin, Eliza Pinckney, Martha Washington, and other patriotic and passionate women, each of whom played a role in raising our nation.

More information about Capitol Reads selections can be found on the WVLC website.
Posted by Megan at 4:34 PM