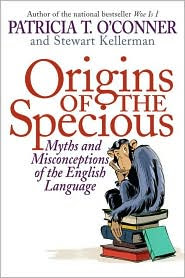 Origins of the Specious: Myths and Misconceptions of the English Language by Patricia T. O'Conner and Stewart Kellerman

If language fascinates you, or even if it doesn't, this book should interest you. It exposes many myths about English grammar and word origina. For example, the rule against splitting an infinitive or ending a sentence with a preposition was an attempt to impose Latin grammar on English, which is a Germanic language. So the next time you hear someone end a sentence with "at" or "on", they are correct.

Most people think SOS stands for something like "Save Our Ship." Actually it is simply the letters in Morse code, which is easy to send and understand. The book is full of these facts we think we know about the source of a word or phrase but don't. The author points out that our usage of English is what creates and changes it. New words come into the language, and old ones take on new meaning.

The book is written in a light, humorous style and includes an index. Each chapter can stand alone, so the reader can skip around if desired.

Patricia T. O'Conner has been an editor at The New York Times Book Review and has written for many magazines and newspapers. She is also the author of several other books on languages and writing. Her husband, Stewart Kellerman, is a former editor for the New York Times and has been a foreign correspondent for United Press International. They have a website http://www.grammarphobia.com/
Posted by Megan at 9:13 AM