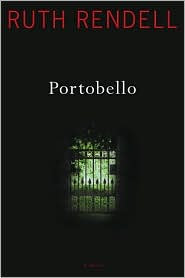 In Portobello, Ruth Rendell, the reigning queen of suspense fiction, gives us a tale of psychological suspense created by interplay among sharply drawn characters. For an 80+ year old writer Rendell has created especially complex and sympathetic younger characters. One of the finest characters is London's Portobello Road itself. Long a haven for criminals and lowlifes, the road is now a prime shopping area whose character is transforming to upscale and multicultural.

The novel starts with Joel losing 115 pounds on the Portobello Road. The money is found by Eugene, an effete shop owner with an addiction to sugar-free candies, who advertises the found money on the road's lampposts. It's a foolish plan that brings rotten fortune to everyone involved- from Lance, a would-be criminal who claims the money, to Ella, Eugene's fiancee, to Gibb, Lance's uncle who found God in prison and now preaches for the Children of Zebulon.

The audiobook version is read by Tim Curry who gives fine voice to the whiney, the snobbish, the dangerous, the amoral and the good who inhabit the Portobello Road.
Posted by Megan at 3:06 PM