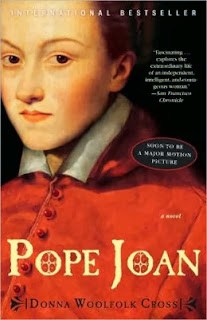 For a thousand years her existence has been denied-- Pope Joan, the woman who disguised herself as a man and rose to rule Christianity. Now this compelling novel animates the legend with a portrait of an unforgettable woman who struggles against restrictions her soul cannot accept.

When her older brother dies in a Viking attack, the brilliant young Joan assumes his identity and enters a Benedictine monastery where, as Brother John Anglicus, she distinguishes herself as a scholar and healer. Eventually drawn to Rome, she becomes enmeshed in a dangerous mix of powerful passion and explosive politics that threatens her life even as it elevates her to the highest throne in the Western World.

More information about Capitol Reads selections can be found on the WVLC website.
Posted by Megan at 2:26 PM