NYT Bestseller Dean King coming to Museum in the Park in Logan this Fri., May 31 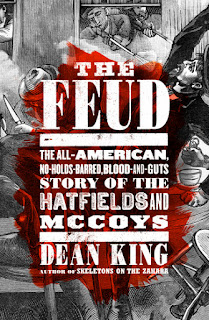 Feud expert and national author Dean King coming to Museum in the Park in Logan this Fri., May 31

This month, New York Times bestselling author, Dean King, has released a new take on this local story, entitled, The Feud: The Hatfields and McCoys: The True Story. Unlike in previous accounts, King chose to begin in the mid-nineteenth century, when the Hatfields and McCoys lived side-by-side in relative harmony along the Tug River. The nonfiction work by Little, Brown and Company is already gaining rave reviews nationwide.

Just beginning his national book tour, King will be appearing in Logan on Friday evening, May 31st. He’s scheduled to speak at Museum in the Park in Chief Logan State Park from 6 p.m. - 8:30 p.m.

Free to the public, the event is being sponsored by the Hatfield-McCoy Convention and Visitors Bureau (CVB); Logan County Chamber of Commerce; Museum in the Park of Chief Logan State Park; Woodland Press, LLC; and Randall Reid-Smith, commissioner of the West Virginia Division of Culture and History.  Light refreshments will be available starting at 6:00 p.m., and King will begin his talk around 6:30.

“It's only appropriate that he would kick off the first official week of his national book tour right here in Logan County—in feud country,” said Debrina Williams, director of the Hatfield-McCoy CVB, adding that King will be sharing some of the adventures he encountered while researching the subject. “He'll have a fascinating slide show and conduct a lively discussion about the project,” Williams added. “For example, we heard he was even shot at while researching his book along the Tug River.”

Afterwards, King will field questions from those in attendance and then have a meet-and-greet, allowing ample time to meet all who attend and sign copies of his new book.

Many will recall that King was one of the historians on the 2012 History Channel documentary, "America's Greatest Feud: The Hatfields and McCoys," narrated by Kevin Costner and directed by Mark Cowen. In addition to King's accomplishments as a historian and author, he is now a producer on an upcoming History Channel reality series based on the Hatfields and McCoys, and will likely be talking about this in greater detail during the event at the park. He helped develop the concept for the television program, and also identified characters for the show.

Besides feud enthusiasts, King is also interested in meeting local writers and journalists, teachers and students, historians and genealogists, and looks forward to discussing the writing craft and his exhaustive research with attendees.

“We want to extend our invitation to everyone for this event at Chief Logan State Park. This is a real honor for our county, and I know Mr. King would be delighted to have you all there,” Williams added.

As an award-winning author of nine non-fiction books, Dean King has chased stories across Europe, Asia, Africa and now Appalachia, specifically making countless trips to the southern part of the Mountain State and the eastern section of the Bluegrass State over the last few years as he researched the complex feud story for this latest book project.  Coming full circle, on Friday evening, he will present his findings and his finished project to the people living in the land where it all began.

Hardbound copies of King's book, The Feud: The Hatfields and McCoys: The True Story, are available locally at The Coal House, in Williamson, Aracoma Drug at Chapmanville, Logan Regional Hospital gift shop in Logan, and at www.woodlandpress.com.