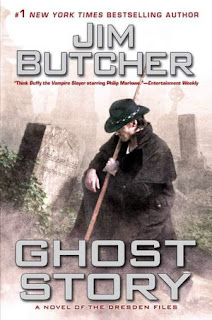 This week's selection is Ghost Story: A Novel of the Dresden Files by Jim Butcher

I have loved this series since Storm Front, the very first novel. Usually I lose interest in a series after the 4th or 5th book, but not so when Harry Blackstone Copperfield Dresden is involved.

Harry's 13th adventure is a little different from any other case he's investigated during his days as Chicago's only Wizard Private Investigator. He's on the trail of a murderer-- his. MT

In his life, Harry's been shot, stabbed, sliced, beaten, burned, crushed, and tortured. And after someone puts a bullet through his chest and leaves him to die in the waters of Lake Michigan, things really start going downhill. But even trapped in the realm between life and death, Harry can't catch a break. He learns that three of his friends are destined to experience unbearable torment and agony. Only by bringing his murderer to justice can he save his friends and move on to what comes next--a feat that would be a lot easier if he had a body and access to his powers. Instead, Harry must work as a ghost, unable to interact with the physical world, invisible and inaudible to almost everyone. Unfortunately he's not the only specter roaming Chicago. There are malevolent shadows who haven't forgotten Harry's predilection for putting evil in its place while he was alive. And now that Harry's on their turf, they are looking for some serious payback. So the late Harry Dresden will have to pull off the ultimate trick without using any magic--or face an eternity as just another lost soul.

This title, and others like it, can be found in the West Virginia Library Commission Reference Library.

The description for this title was provided by NoveList Plus. For more on Harry Dresden, or similar books, check out NoveList Plus on WVInfoDepot.
Posted by Megan at 12:49 PM