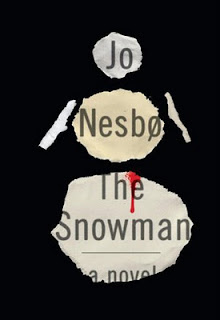 This week's pick is The Snowman by Jo Nesbo

Internationally acclaimed crime writer Jo Nesbo's anti-hero police investigator, Harry Hole is back: in a bone-chilling thriller that will take Hole to the brink of insanity.

Oslo in November. The first snow of the season has fallen. A boy named Jonas wakes in the night to find his mother gone. Out his window, in the cold moonlight, he sees the snowman that inexplicably appeared in the yard earlier in the day. Around its neck is his mother's pink scarf.

Hole suspects a link between a menacing letter he's received and the disappearance of Jonas' mother--and of perhaps a dozen other women, all of whom went missing on the day of the first snowfall. As his investigation deepens, something else emerges: he is becoming a pawn in an increasingly terrifying game whose rules are devised--and constantly revised--by the killer.

Fiercely suspenseful, its characters brilliantly realized, its atmosphere permeated with evil, The Snowman is the electrifying work of one of the best crime writers of our time.

This title, and others like it, can be found in the West Virginia Library Commission Reference Library.
Posted by Megan at 2:51 PM