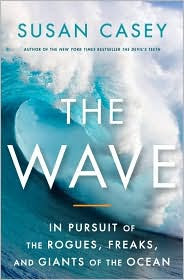 The Wave: In Pursuit of the Rogues, Freaks, and Giants of the Ocean by Susan Casey

From Susan Casey, the bestselling author of The Devil's Teeth, an astonishing book about colossal, ship-swallowing waves, and the surfers and scientists who seek them out.

For centuries, mariners have spun stories of gargantuan rogue waves, one hundred feet high or more, appearing seemingly from nowhere. Until recently scientists dismissed these stories as typical sailor tales--because waves that high would seem to violate the laws of physics.

But on the past few decades, a startling number of ships vanished in the depths of the ocean--massive freighters sunk so quickly there was often no time for an SOS call--and credible eyewitness accounts emerged, such as one from the captain of the Queen Elizabeth 2, who swore the liner was hit by a wave taller than the ninety-five-foot bridge. Faced with mounting evidence, marine scientists realized something truly scary was brewing in the planet's waters. They found their proof in February 2000, when the British research vessel RRS Discovery was trapped in the North Atlantic in a vortex of impossibly mammoth waves, including several that approached one hundred feet.

As scientists scramble to understand the phenomenon of immense waves, another breed of people view them as the ultimate challenge. These are extreme surfers, who scan global weather updates on dedicated Web sites and fly around the world looking for the ocean's monsters. That this is possible at all is due to the pioneering technique of legendary surfer Laird Hamilton, who, with a group of friends in Hawaii, figured out how to ride terrifyingly high waves of seventy to eighty feet. When a surf company offered a huge bounty to be given to the first person to ride a hundred-foot wave, less-accomplished surfers entered the sport and the stakes became life or death.

Susan Casey does a magnificent job painting the extraordinary sub-culture of the unique tribe of people--their codes, their addiction to risks that others would view as borderline insane, their amazing physical feats, and their feeling for the infinite strength of the ocean. In Casey's mesmerizing account, the exploits of Hamilton and his fellow extreme surfers are juxtaposed against the scientists' urgent efforts to understand the annihilating power of waves, from the tsunami that wiped out 250,000 people in the Pacific in 2004 (and the tsunami that could arise in the Atlantic and sweep the East Coast of the Untied States), to the threat to the global shipping system, to the 1,740-foot wave that leveled part of the Alaskan coast.

With inexorable, adrenaline-fueled verve, The Wave brilliantly portrays human beings confronting nature at its most ferocious.

(synopsis from the publisher)
Posted by Megan at 3:53 PM