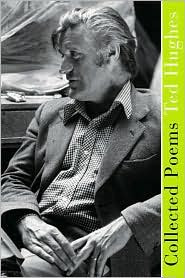 This book collects the work of someone who touched greatness many times over a long and distinguished career. Ted Hughes had the uncanny ability to imagine otherness, whether fox or crow, and to render the creature in vivid close-up. In his poetry, steeped with folklore and myth, we do not simply read about nature, we experience nature.

This collection includes not only the official editions originally published by Faber and Faber, but also work from literary journals and small-press editions. Hughes revisited and revised throughout his career, and this volume does not cheat us of this growth.

Hughes was a brilliant poet and an accomplished translator, ultimately attaining the post of British poet laureate from 1984 until his death in 1998. He was a literary genius, and his talent doesn’t slowly evolve, it erupts from this volume.

Ted Hughes has been reviled for over four decades for his part in the life and death of his wife, the poet Sylvia Plath. Ted Hughes evidently had a great many faults both specifically as a man and more generally as a human being, leading people to be intensely superficially interested in his life, but not at all in his work. This can only be said to be their loss.
Posted by Megan at 10:17 AM