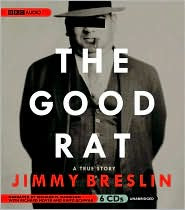 The Good Rat: A True Story by Jimmy Breslin (audiobook)

If you are a Law and Order fan you want to listen to the audio version of The Good Rat: A True Story by Jimmy Breslin. Using the testimony of turncoat mob associate Burton Kaplan as the foundation, Breslin gives a commentary on the decline and fall of the Mafia and his coverage of organized crime in New York City over the past 40 years. The three narrators make the story come alive for the listener. Richard M. Davidson reads most of the text, creating voices for such note worthies as John Gotti, Sammy “the Bull” Gravano and Gaspipe Casso (so called because a piece of gas pipe was his favorite method of dispatching annoyances). When he is reading Breslin’s first person prose you imagine you are hearing Jimmy reading his own words. Kaipo Schwab performs as U.S. Attorney Robert Henoch and Richard Mover portrays Kaplan in a manner that makes you think you are listening to a transcript of Kaplan’s 2006 testimony against killer cops Stephen Caracappa and Louis Eppolito. A diehard L & O fan will recognize some plots from the show that were inspired by events that are occurred during the timeframe of this story.